All processes are carefully handmade by craftsmen with traditional techniques, resulting in a beautiful chasen. Each will have slightly unique shape and coloring due to hand craft and carving.

The characteristic of the true chasen is that the egg-shaped curve cuts not only the tip but also the entirety, finished thinly and elastic, optimal to make fine matcha.

It is said that there are only about 15 chasen craftsmen in Japan today, and the highly skilled Takayama chasen is extremely skinful, and an excellent tool for making fine and smooth matcha. It is carefully made to be used for a long time.

Born in Takayama in Ikoma, Nara Prefecture, about 500 years ago during the Muromachi period.

It is said that the tea master Murata Juko, who is said to be the founder of Wabi-cha, requested the production of a stirring tool suitable for the tea ceremony, and that it was created by Takayama Minbu-Irimichi Sosui. After that, the Takayama Chasen that was created was presented to Emperor Gotomimon. He was extremlly pleased with it, and received the name of "Takashi" from the emperor. Soseki was honored and worked hard to make chasen and improve his skills, and the manufacturing method became the story of the Takayama family. After that, when the Takayama family moved, the remaining 16 vassals entrusted the production of the chasen.

Takayama Chasen is made by carefully performing all the following eight steps by hand.

Cut bamboo that has been aged for 2 to 3 years to the required size. Three types of raw materials are often used: white bamboo, black bamboo, and soot bamboo.

The first step to make the tips. Peel the epidermis of the tip from the upper half of the node. Then divide the part that will be the tip with a kitchen knife. There are differences depending on the thickness of the bamboo, but the standard is at least 12 - 24 cuts.

The process of breaking the part divided by the piece of wood into smaller pieces. When splitting, the sizes are split alternately.

The process of making the most difficult and important tips that affect the taste of matcha. Carefully scrape the tips so that they are thinner than the roots. After that, the chasen gets squeezed so that it becomes round on the body to make it into shape.

The process of scraping both corners of the chasen one by one and removing the corners. Eliminating the corners makes it difficult for the tea to adhere.

The process of performing the upper knitting by double threading to firmly fix the root of the lower knitted rising ear.

The process of determining the size of the chasen and adjusting the height and spacing of the falling ears and roots.

The final process to correct the disorder of the tip and adjust the shape, height and interval to the tip.

Do not use dishwasher

My daughter only found "industrial chasen", cheap but not very attractive. I bought her this one. She now uses it every day. She adores it.

The craftsmanship is top class. It’s light and gorgeous. I almost use it everyday . 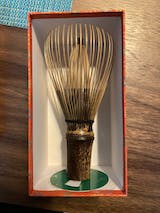 Elegant design, feels good using it and of course the tea taste great

this chasen is not only beautiful to look at, it feels so lovely and delicate in the hand. it brings me so much joy to use. highly recommend!! Sourced from micro farms in Kyoto

Directly sourced, traceable from local micro farms which we have direct contact with. You can also consider our tea tool line up for an enhanced experience.